Today, American classic metallers Pounder announce the full list of confirmed dates & venues for next month's tour alongside comrades Gygax. Dubbed the "Highly Uncivilized" tour, Pounder will be hitting the American West Coast, supporting their critically acclaimed debut album, Uncivilized, released last month by Hells Headbangers.
"We're really psyched to get out in the trenches and play stuff from the record live – some of these songs are in dire need of being road-tested," asserts Pounder guitarist/vocalist Matt Harvey. The shows promise to be high-volume, leather/denim-friendly affairs not to be missed. Harvey assures everyone that "the gigs will be loud, sweaty, and neck-breaking – the way it should be!" Full list of confirmed dates & venues, as well as poster art, are as follows:
May 9 – Portland, OR @ Star Theater
May 10 – Seattle, WA @ Highline
May 11 – Grant's Pass, OR @ The Haul
May 12 – Oakland, CA @ Elbo Room
May 16 – Sacramento, CA @ Blue Lamp
May 17 – San Diego, CA @ Tower Bar
May 18 – Los Angeles, CA @ Five Star Bar
May 19 – Phoenix, AZ @ Club Red 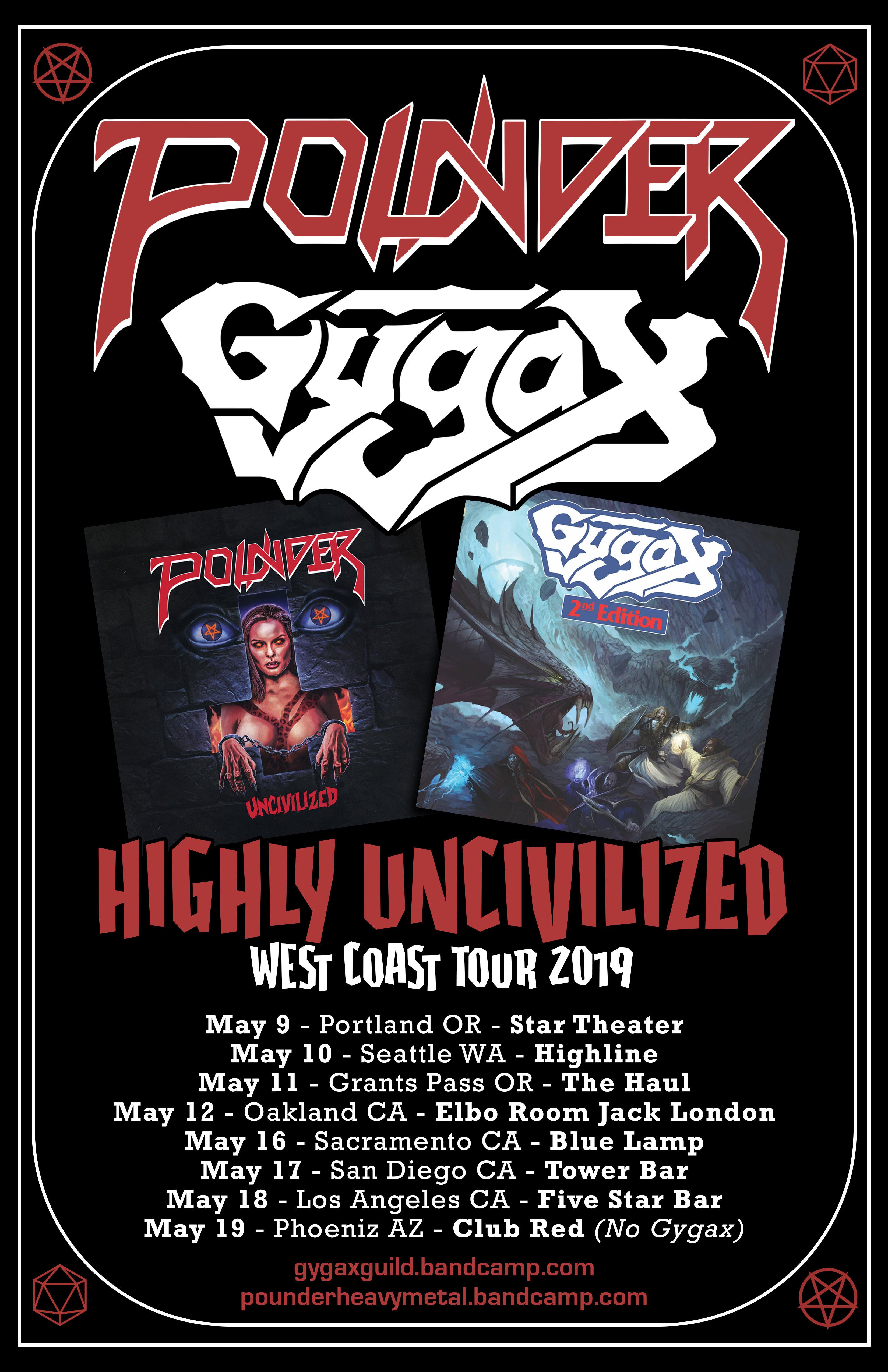 Pounder specialize in dealing out classic heavy metal tunes, expertly crafted and executed, drawing from their NWOBHM influences with hints of early '80s speed metal, Sunset Strip flash, and AOR accessibility. The band was borne out of the members' long-standing love for classic NWOBHM and traditional metal in general. After kicking around in the backburner of main songwriter Matt Harvey's (of Exhumed, Gruesome, and Expulsion) imagination for a few years, he and bassist Alejandro Corredor (Nausea LA, live bassist for Vallenfyre) met guitarist Tom Draper (Carcass, ex-Angel Witch, Crowning Glory), an Englishman relocated to California, and they quickly bonded over their love of classic metal and hard rock.

It didn't take long for things to start coalescing for Pounder once Harvey decided to take over vocal duties himself, after searching for a singer without any luck. In February 2017, the trio (with the aid of North Carolina-based session drummer Carlos Donegean) entered Trench studios in Corona, California to record seven songs, four of which became their Heavy Metal Disaster demo. The other three songs featured on their Faster Than Fire EP for Shadow Kingdom, which also included their live cover of the Angel Witch classic "Sweet Danger." With that EP serving as a teaser for their debut album for Hells Headbangers, Uncivilized, the time has at last arrived for Pounder to truly spread their wings of metal.
Indeed, Pounder truly spread their wings here, unloading an arsenal of many-metalled majesty. Any way you cut it, Uncivilized is an electric, undeniably timeless cross-section of Pounder's iron-clad aesthetic, underlining in no uncertain terms just what's so invigorating and life-affirming about the art of HEAVY METAL. From high-octane speed metal cruisers to moody, night-walking stompers to even haunting power-ballads like "Long Time No Love" and "Answer the Call," Uncivilized delivers the goods, track after track, in a tight, press-repeat 42 minutes. And it's wrapped in a production job that's on the right side of clean 'n' clear, wholly allowing the grit to glisten and the flash to fly. Pounder may be Uncivilized, but that doesn't mean they can't put together a professional product.
Trends may come and go, but only true metal endures. Pounder are as unyielding as the name, so prepared to get Uncivilized! Stream the full album HERE at Hells Headbangers' Bandcamp, where it can also be ordered.

0
comments powered by Disqus
You May Also Like
STATIC-X Uncovers More Unreleased Songs Left Behind...