SKID ROW   guitarist   Dave "Snake" Sabo   has once again shot down the possibility of a reunion with   Sebastian Bach , saying that the chances of the singer coming back to the band are "slim to none."

Bach   fronted   SKID ROW   until 1996, when he was fired. Instead of throwing in the towel, the remaining members took a hiatus and went on to play briefly in a band called   OZONE MONDAY .

In 1999,   SKID ROW   reformed and, after a bit of shuffling over the years, featured a lineup consisting of original bassist   Rachel Bolan   and guitarists   Sabo   and   Scotti Hill , alongside drummer   Rob Hammersmith   and singer   Johnny Solinger .

SKID ROW   fired   Solinger   over the phone in April 2015, a few hours before announcing ex- TNT   vocalist   Tony Harnell   as his replacement. Eight months later,   Harnell   exited the band and was replaced by South African-born, British-based singer   ZP Theart , who previously fronted   DRAGONFORCE ,   TANK   and   I AM I .

During an appearance this past week on the   "Trunk Nation"   show on   SiriusXM   channel   Volume ,   Sabo   confirmed that "there was definitely dialog that was going back and forth and there was talk" last year about a possible reunion with   Bach . "I think everybody was entertaining the idea," he said. "And I think, really, what it ended up being was we realized that whatever it was that tore us apart years ago still existed.

"We got offered a lot of money," he continued. "There was a lot of stuff that's been said about what happened and tours being booked… That didn't happen — tours were not booked. Any offers that came in came through to me and   Rachel , 'cause it's our band. So there was a good amount of money being offered. And then with the dialog that went back and forth, it got ugly again."

According to   Sabo , the disagreements between   SKID ROW 's core members and   Bach   about a possible reunion "had nothing to do with money. I'll tell you straight up — no one was making was more than anybody else," he said. "That was one of the things that we said…   Rachel   and I and   Scotti , we were, like, 'This is easy from that perspective.' I'm not gonna sit there and do it any other way. It was more about control, I think. Other people having a desire to have more control over this thing than we were willing to give. And it was not about anything other than this is our band.

"This is not ego-driven, I promise you,"   Sabo   reaffirmed. "It wasn't about me making more money than you, or you making more… it wasn't about that at all. I guess it was the personality conflicts that existed before, 20 years ago [that are still there]."

When host   Eddie Trunk   pointed out to   Sabo   that   MÖTLEY CRÜE   managed to complete an 18-month final tour while traveling on separate buses and barely speaking to each other, the guitarist responded: "Yeah, but they were miserable — they were all miserable. And see, that's the thing, man… I don't know… I guess I look at it differently. I really like my life, man. I really like being happy. I have great joy playing   SKID ROW   music now. Not to say that I didn't before, but in this moment in time, I'm extremely happy. My life is awesome, my friends are awesome, the people I make music and jam with, they're all awesome. And so, I've gotta say, yeah, the idea, the romantic notion of a reunion and the monetary aspect of it is all well and good, but at the end of the day, man, I really enjoy the space that I'm in. I just wanna be a good guy, I wanna be a good husband, a good father, a good friend, a good brother. The way that we existed towards the end, after   'Subhuman Race'   and when everything fell apart, it was misery for everybody — not just me; for everybody."

Despite his lack of interest in being in a band with   Bach   again,   Sabo   will not completely rule out a reunion with the charismatic singer. "I always never say never,"   Sabo   said. "I guess that's like my way of not committing to saying, 'No, it will never happen.' The chances of it happening, I mean, I would say they're slim to none, but I never say never. But I will say this: in this day and age, we live in the moment, man. I mean, I'm living right here, right now in the moment. And I love having   ZP   in the band."

Sabo   said that he looks back on all periods of   SKID ROW   fondly. "I'm so proud of everything that's existed between 1986 and now," he said. "A lot of people, if they're in a similar situation like we are — we have a new singer and new drummer we've had for a while — they tend to hide from their past and almost brush it aside. I embrace it. I'm so proud of what we created — the five original members. We had a period of nine, ten years that was… it was furious and crazy and awful and amazing and every adjective you can come up with, and it burned brightly. And then it died out. And sometimes that happens — it happens to athletes, it happens to artists, and it happens to bands. It happened to us — we burned out. And so when   Rachel   and I and   Scotti   started… We took a couple of years [to do]   OZONE MONDAY ; that was like a bridgegap. We wanted to play those [ SKID ROW ] songs again; we just didn't wanna put the band back together as its previous form was. And so for us, it was really… it wasn't about money — never has been.

"Happiness has always been paramount to me," he added. "And music, to me, is what has always brought me just this incredible amount of joy. It's what fuels my life — creating music, being around music. I wanna create music and play music with people that I enjoy doing it with. And I enjoyed doing it with a bunch of people throughout our career, and then it stopped being enjoyable; the joy was ripped out of it — for a myriad reasons, whatever they may be. Everyone's got their own stories. I take responsibility for my end, for whatever that might be. But at the end of the day, for better or for worse,   Rachel   and started the band, it's our band. Love us or hate us, it   is   ours, and we're gonna do with it what we want to do to make our lives happier.

"Being in a band, creating music, writing music is a very selfish thing — it's selfish act," he said. "The greatest songs are written from a selfish point of view — you're doing it to gratify your need and your desire to emote something. And songwriting, first and foremost, is selfish. And then you hope you can connect with people, but by and large, it's selfish. And so if that seems selfish how we conduct our band business, so be it — it   is   ours.

"I love the fact that people care enough and have a history with the band that they would wanna see that exist again — I really do; I think it's amazing, and I'm supremely flattered by that — I just can't give it to 'em right now, and that's just the way that it is."

Asked why things fell apart so quickly with   Harnell ,   Sabo   said: "We had known each other —   Rachel ,   Scotti   and I had known   Tony   for a long time. Obviously, a great singer. Some things just aren't meant to work… they just don't work together. Knowing him before and then working with him, it was two separate… it really was two different things. A lot of conflict, a lot of butting heads, and it just… it never meshed, it was never right. We knew him for a long time, [but we] never worked with him — never worked in a band situation, in a band environment with him. And, again, you know what — for better or for worse, this is our band; it belongs to us. And so if someone is gonna come in and work with us, we have a certain way that we do things, and that may not work for some people. It didn't work for him. Look, [he's] a talented guy; it just wasn't right for us."

By contrast,   Sabo   couldn't speak in more glowing terms about   Theart , who was officially named   SKID ROW 's new singer in January 2017. "He's from   DRAGONFORCE ," the guitarist said. "I was always familiar with the band and their reputation. Their music was never in my wheelhouse, so to speak.   Rachel   had become really good friends with him, and when things fell apart with   Tony … We had previously done shows in the U.K. where his band after   DRAGONFORCE   [ I AM I ] had opened up for us. And I saw him, and he's a great singer. But I never thought about him being with   SKID ROW . As soon as everything fell apart with   Tony ,   Rachel   was, like, 'Let's just give   ZP   a call.' And I'm, like, 'Okay. Cool.' And so we did. And he flew in."

"Look, first of all, he's an excellent person — a really good guy,"   Sabo   continued. "Blue collar, hard worker, gets his hands dirty. If he sees the crew guys having a problem with one of the road cases, he's over there helping 'em. He wants to get in the trenches, he wants to work. And he respects the history of the band. He doesn't attempt to do something so different to shy away from what our catalog is. He came in knowing… he came in and auditioned and did, like, 15, 16 songs. He used to warm up to our stuff. He's really, really well versed and familiar with it. So this has been a really, really easy fit, and it's been a pleasure to be on stage with him."

Sabo   also talked about the fact that   Bach 's current live set still consists primarily of classic   SKID ROW   songs, despite the fact that   Sebastian   has no less than three full-length solo albums under his belt.

"I'm cool with it,"   Sabo   said. 'Again, we had nine or ten years of history together that were pretty phenomenal from a success standpoint. And we had a lot of good times — we did — but, unfortunately, the bad times outweighed the good times, and that's why the band stopped in that form. But as far as going out there and doing   SKID ROW   songs, he has every right to — he sang 'em. I'm honored, to be honest with you. Some people might look at it differently. It doesn't bother me. It helps keep our history alive. I'm cool with that."

Bach   has consistently expressed his desire to reunite with his former bandmates, telling   Loudwire   last year: "I don't have any reason why not to do that. I have no animosity towards anybody in   SKID ROW , and the fact that we're all, five of us, still alive in this world is a pretty amazing feat. So I would someday definitely like to hear the five guys who made those records play live together again. Yes, I would. 'Cause I'm a fan too." He added: "I'm up for it, if they are."

Hill   in August also ruled out the possibility of a reunion with   Bach , explaining he and his bandmates don't want to "put ourselves in a volatile situation and be unhappy and destroy what we have now." Via Blabbermouth

0
comments powered by Disqus
You May Also Like
GHOST's TOBIAS FORGE And Former Members To Meet In... 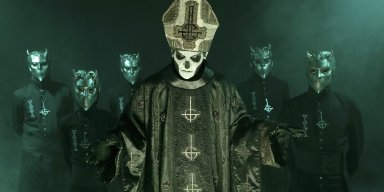 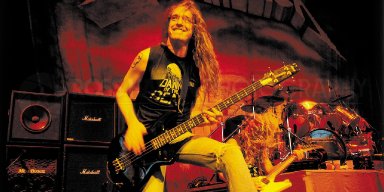 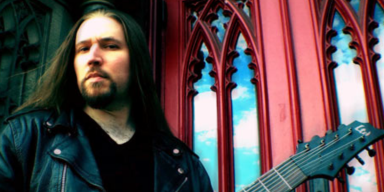 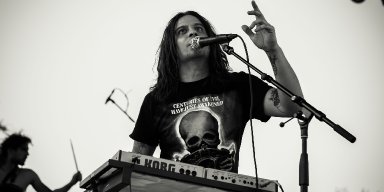 Comments Likes
CORROSION OF CONFORMITY To Release No Cross No Crown... 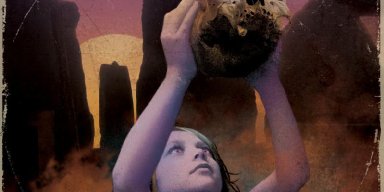 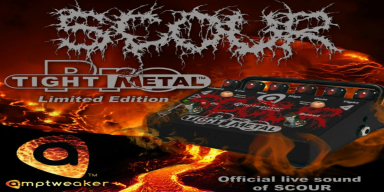 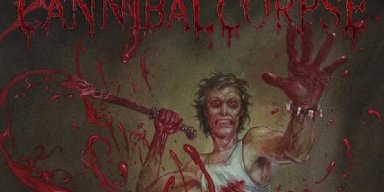 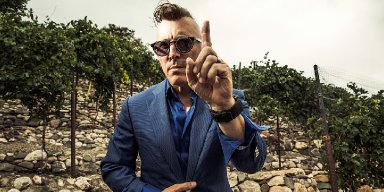