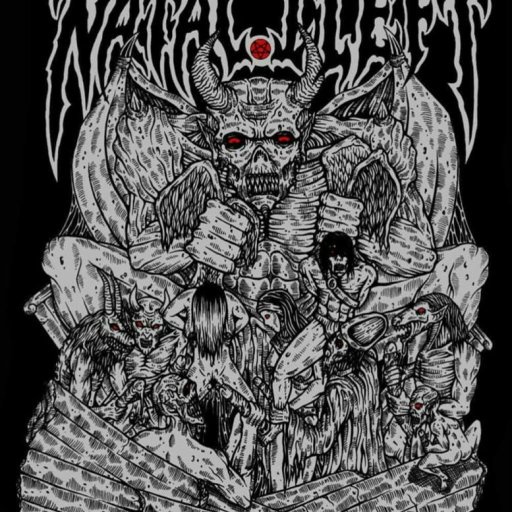 Hailing from a 3rd world country(Philippines), Natal Cleft still managed to make a noise in the international metal scene. They just wanted to share their passion for metal and it all started when they made it to top 1 in metal charts at Signmeto Roadrunner Records. A&R gave them 7 out of 10 and fellow musicians and metalhead fanatics across the globe hailed them as skilled musicians.The label described Natal Cleft as "Some seriously evil shit from the Philippines." Some claimed Natal Cleft has an original sound making them apart from other bands. Some touted them as technical blackdeath metal,others say they are prog/grind jazz metal. But according to frontman Zeekevil(this guy has an evil powerful voice, Monte Conner respected his prowess),they call their music as Cerebral metal.Natal Cleft songs are played in international radio and web stations and they have already an international fanbase. Musicians who worked with Dave Lombardo(Slayer) are also fans of the band and they never hesitated to spread the virus of Natal Cleft. The band was offered to have a European tour with Nightrage, Scar of the Sun, Devastating Enemy and Deadlock but the tour was not realized because Deadlock cant make it.Karl Sanders of Nile,James Payne(drummer of Vital Remains and Hour of Penance,Methedras(Italy),Disentomb's drummer,Christian Olde Wolbers(Fear Factory),Gutslit(India),Braindrill's guitarist, Pungent Stench vocals,Sven(vocals) of Fleshcrawl, Coheed and Cambria's bassist as well as Sonic Syndicate's vox also appreciated the band's awesome music.

Technically, Natal Cleft means a butt crack but Cleftomaniacs(fans of the band) claimed that its a metaphor that the band KICKS BUTT or shall we say KICKS ASS because of their cerebral original sound.Zeekevil's powerful dynamic evil voice will haunt your brain cells.While Atan's and Darrs' punishing technical rare riffs will be on a repeat mode in your soul.Rex's bass lines are way way too mature and soothing as well as diabolic.Denden's drumlines are versatile. I have listened to all their songs and each one is a masterpiece.And they are tight live to the point of goosebumps crawling in your existence.Dynamics and always exciting as well as unpredictable patterns.Gifted musicans indeed.

Words of Todd Mendieta(USA/Costa Rica) on Natal Cleft music "Great guitar and drum work and sounds very different than the average death metal band around here. Vocals are very high pitched, but I like that only because it is different and I gather thats why A and R rating you so high for your originality. Your drummer fuckin kicks ass! Happy Holidays! You guys must be very tired at the end of your set!lol!You guys have pretty much made the rest of these types of bands look like they just stepped out of their diapers!lol!10/10 from me and a pick in my favorites!Your fuckin video is the shit!!! Love you guys! If A and R don't sign you, then there is no hope for any of us!"

TODD MENDIETA HAS BEEN HAILED BY FANS AND CRITICS AS THE NEXT,BIG THING TO HIT THE GUITAR SCENE SINCE VAI, SATRIANI, VAN HALEN, AND HEROES OF THE LIKES. COMPARABLE ONLY IN VIRTUOSO CHOPS AND ABILITY, TODD HAS BEEN CARVING HIS OWN IDENTITY AND STYLE.TODD HAS RECENTLY WORKED WITH FAMOUS ENGINEER, SCOTT HUMPHRIES AND DONE SEVERAL COLLABORATIONS WITH ROB ZOMBIE AND DAVE LOMBARDO, THE DRUMMER FROM SLAYER.TODD HAS BEEN WRITTEN UP IN 2 MAGAZINES,THE ENTERTAINMENT CHRONICLE AND HAS BEEN NOTED AND RECOGNIZED AS ONE OF THE TOP 10 MUSICIANS AND INSTRUMENTAL SONGWRITERS OF THIS ERA!