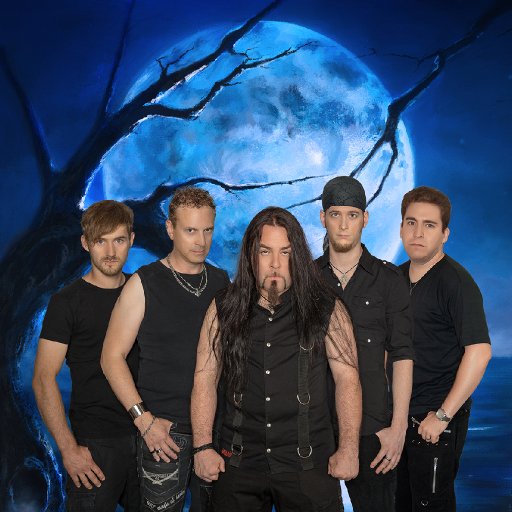 MOONCRY is settled in Southern Germany at the Lake Constance.

The band creates a special and distinctive sound, which may be described as Dark Melodic Metal or as Symphonic Power Metal with elements of Gothic and Thrash.

Powerful heavy guitar riffs with classical orchestral keyboard sound and energetic drumming, frames the melancholic poetries of diversified and powerful male vocals. The lyrics are about hurt, anger and frustration but also about hope and desire in a very vivid way.

With its mystic and dark, epic and aggressive, melodic and emotional tunes, MOONCRY creates a truly dynamic and touching atmosphere.

The band was founded in 2006 by young and creative musicians, but also by experienced performers.

In 2007 MOONCRY released their debut album “Legacy of Hope” which received a lot of positive feedback by magazines and websites. Through an interview and a sample track in the well-known German Metal magazine “Legacy” and impressing live performances (e. g. MyMusic expo), MOONCRY had soon become quite popular in southern Germany.

In 2010 MOONCRY produced their second long player „ Rivers of Heart“ at the Empire Studios of Rolf Munkes (Tony Martin/ex Black Sabbath). This record was again rated exceptionally well and was also followed by an interview and a sample track in the “Legacy” magazine.

In May 2011 MOONCRY played at the biggest European metal festival on Metalfest Helvetia, together with bands like Sabaton, Amorphis, Amon Amarth, Rage, Cradle of Filth, Arch Enemy, Wintersun, Thaurorod etc.

In early 2012 the heavy-magazine „Stormbringer“ nominated „Rivers of Heart“ as the best album of 2011, and MOONCRY as surprise of the year 2011.

In spring 2012 MOONCRY was tour support for the band „Serenity“ and later MOONCRY was Headliner together with the legendary band AXXIS.

In 2013 MOONCRY recorded their 3rd Album „A Mirror’s Diary“, again at the Empire Studios of Rolf Munkes. With this new disc the band managed to present not only their further musical development by sticking to the path of their previous album, but even enter an absolutely new level of Dark Melodic Metal: More powerful, more epic and more dynamic than ever before.

In early 2014 the heavy-magazine Crossfire nominated “A Mirror’s Diary” for rank 3 of the top ten albums of 2013.

In April 2014 MOONCRY received the rating for “Masters of Symphonic Metal” and performed together with Leaves’ Eyes and Delain at the festival with the same name.

In July 2015 MOONCRY performed at the Metaldays festival in Slovenia, beside bands like Saxon, Fear Factory, Queensryche and Devin Townsend Project. Once again the band played at the "Masters of Symphonic Metal" in November 2015, together with Beyond the Black and Masterplan.

In early 2016 the magazine “Metal over the South” nominated “A Mirror’s Diary” for the album of the year 2015.

In September 2016 MOONCRY entered with the song “The Beast Within Me” straight on rank no. 26 of the US National Airplay Top 50 Rock Charts, and in competition with artists like Disturbed, Marilyn Manson, Beck and Volbeat, they held 15 weeks up to rank no. 16.

Stormbringer.at: „...Lately I’ve heard nothing comparable in this genre...“

Pure-metal.de: „...this band definitely fits together.“

Metalunderground.at: „...dark music in a class of its own...a hammer album...“

Metal-inside.de: „...the songs shine by wonderful instrumental passages where the keys amazingly fit together with the heavy riffing and this is a pleasure for every fan of this genre...“

Metal-observer.com: „...the injection of both speed and chaos is fantastically welcome...Berti Miller lays down the notes like he was born to do it...“

Totentanz-magazin.de: „The songs are throughout confident and present MOONCRY as a promising newcomer...“

Reverbnation: "The big sound is arena worthy...In tradition of Purple, Dio and other monsters of rock...Over the top...”

Metalunderground.at: „The door into the annals of melodic metal was opened...you cannot make a mixture more perfectly...“

Reverbnation: "It has all the essential to be with one of the greatest in media today."

Metal-impressions.de: „...high class and offers a lot of variations.“

Madcapmusicreview.com: „...all of the best elements of the metal genre...musically executed to the highest caliber.“

She-Wolf.eu: „A masterpiece of modern metal!“