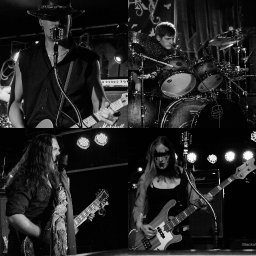 Timeline Mentions
joined February 25, 2018
FyreSky are a 4 piece original Goth/Hard band based in Southend On Sea Essex (UK). It's coming up for their 2nd anniversary as a band and 2017 has been a...

FyreSky are a 4 piece original Goth/Hard band based in Southend On Sea Essex (UK). It's coming up for their 2nd anniversary as a band and 2017 has been a very successful year for FyreSky. Having released 2 singles this year 'StarChaser/Red Velvet Rope' and most recently 'Carpe Noctem'; both of which have been well received with international airplay and recently play on 'Hard Rock Hell Radio'. At the start of the year FyreSky competed in and won the Essex 'Undiscovered Live Music Project' having been judged on their originality, song-writing and live performance they came out on top. With a busy year of gigging and starting to bring their high-energy live performance to further a field in the UK. They performed at Southend's open air festival 'Village Green' and opened the mainstage setting a high standard for the day. This summer FyreSky also started to put their stamp on the 'female rock/metal' community when they were the first ever male-fronted band to be invited to play 'The Dames of Darkness Festival' After an incredible show and near selling out on merch and cds their performance at this event led them to be invited to play more festivals in 2018 in the same scene. FyreSky are proud to have honed their own unique sound, it is hard to 'pigeon-hole' them to a set genre. Containing, Gothic, Hard Rock and Symphonic elements, having been compared to a variety or artists such as Rainbow, HIM, Evanescence and even being called 'the new Iron Maiden' on HRH radio. Their live shows are a fully immersive experience; the vision of the band has always been to deliver more, quality original material, and an in your face goth/rock show that plays with all your senses to bring you into their dark and beautiful world. To finish off this year FyreSky had a successful run as main support to 'The Heretic Order' on their December tour, and are now returning to the studio shortly to work on their first full studio release for 2018.