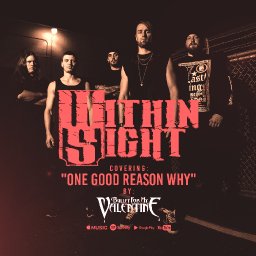 Timeline
Vancouver, WA   withinsightband.com/   joined July 06, 2017
Within Sight is an American hard rock band from Vancouver, WA. The band was founded in late 2011 by Grant Evans(Guitars/vocals) and Steven...

Within Sight is an American hard rock band from Vancouver, WA. The band was founded in late 2011 by Grant Evans(Guitars/vocals) and Steven Carlson(Guitars). In November 2013 Within Sight completed their lineup with Sean 'Shredder' Searls (Guitars), Sean Trenda (Drums/Vocals), and Jimmy Sandvig (Bass).

The band's sound comes from a unique blend of all the musical influences each band member carries. The band are heavily influenced by older bands such as Metallica, as well as more contemporary acts like Bullet for My Valentine, Trivium, and A Day To Remember.

Within Sight has come a long way since playing their first show in March 2014. Their first album "The Distance Traveled" was released in December of 2014, followed by a three track acoustic EP in February 2016. Within Sight released their second full length album “ From The Heart ” on November 2016, and have received positive reactions to the exciting direction their music is going. New singles and an EP has been announced for 2018.

The band has toured all over the U.S. and have a dedicated touring schedule. Catch them at a venue to experience their exciting live performace!