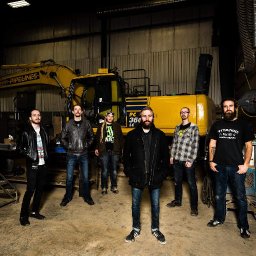 In Ruin is a progressive metalcore band from Saskatoon, Saskatchewan; Canada. After self-producing their debut album “Murmurs”, and releasing it in late 2016, In Ruin has been committing their time to short term touring, a follow up EP, and a music video.  Having gained a reliable following in their city and surrounding area, In Ruin is ready to take on larger atmospheres, bigger crowds, and better things.
In Ruin is a classic 6-piece metalcore setup blending the bass and drums with 2 guitars and keyboard/synth.  They provide an attractive blend of riffing, breakdowns, and electronic or sometimes orchestral themes that tie it all up in a beautifully aggressive package.  In Ruin’s debut album “Murmurs” is available on Apple Music, Google Play, Bandcamp, Amazon, Spotify, Pandora Radio and many, many more.

@inruin Posted an update
3 years ago
The Roxy in Saskatoon is going to screen the debut of our official music video right before a screening of "Heavy Metal"on April 25! Wicked!