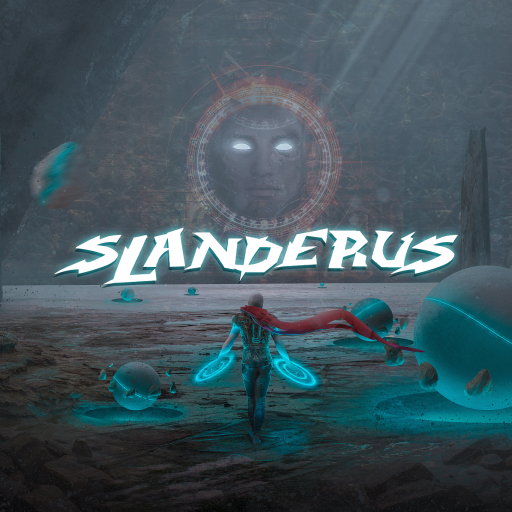 Bio:   Slanderus is a progressive metal band straight out of the Inland Empire, with members from Upland, Ontario and Riverside. Founded and formed by guitarist (and backing vocalist), Jason Kennedy, who also creates the music that is overloaded with heavy, yet intricate guitar solos- mesmerizing riffs and flawless breakdowns. Drummer, Cameron McCall, plays his set like it's a part of him- with an ease that says "this comes more naturally to me than speaking"- every count is melodic, yet powerful and compelling, played with an unparalleled passion. Bassist, Michael Basquez , lets loose on his bass guitar with fat, yet mellow and authoritative riffs- commanding a rhythmic groove. Last, but certainly not least, Allen Alamillo- lead vocalist, uses painfully honest lyrics in combination with an innately sincere tone and impressive pitches that just pulls you in. Round off all this talent, with the energy that they pack into every one of their shows, you're in for one hell of a night!

They played their first show at Angel's Roadhouse (Yucaipa) in 2009, following with a strong attack on hot spots from their native locale- such as the Ugly Duck, the Marquis Lounge and the Music Room (San Bernardino), and then taking their mind-bending sound to new spots, such as Liam's Irish Pub (Colton), Shamrock's (Chino), the 1616 Club (Los Angeles), the Kitty Kat Lounge (formerly the Can, Westminster), several successful Battle of the Bands competitions and far too many others to list in just one biography.

With such a heavy and diverse group of influences, from bands such as Anthrax, Dream Theater, Iron Maiden, Machine Head, Metallica, Queensrÿche, Rush, Slipknot and System of a Down- it's no wonder they won "Best Metal Band of 2012" in IE Weekly. Live shows are packed full of spontaneous surprises; different intros every night, spur of the moment free-style jams, solos from different members. The stamina of the Walls of the Mind EP (2017) plays with seemingly reckless abandon, divergent styles, and a determined ambition that makes you want to play it on loop until your stereo implodes.

Also worth noting, is their contribution to the metal scene in the Inland Empire. Tired of dealing with a "middle-man" when booking shows? They setup our their shows, in turn putting shows into the hands of the bands. Every show created by them is made cover-charge free- to increase the draw of shows, first come first serve to bands- to increase the motivation of the bands booking and every band was rewarded equally for shows- headliners received the same treatment as opening bands. Slanderus has booked and played shows with nearly 100 different bands, expanding both their fan base and their musical connections.


Band Interests:
* Playing live shows
* Writing the best songs we possibly can
* Bringing Heavy metal to the masses
* Our Mission is to please the crowd and entertain. Of course you can't make everyone happy, but that doesn't stop us from trying.