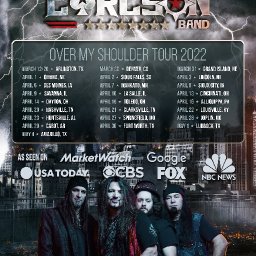 Jeff Carlson Band is from Las Vegas, Nevada.  The band consists of Jeff- Lead Vocals, Rhythm  Guitar, Robbie Wolfe- Lead Guitar and Backing Vocals, with Cory Kay on Bass Guitar, and Todd Turgeon on Drums.  Potomac Records newly signed Jeff to a contract in January of 2018, with releasing Jeff's new single "Never Be Another You" on March 20th of 2018!  Jeff is releasing the anticipated single "So Long" on February 26th of 2019, as well as the new single "Screamin' Inside" and the new E.P. "Second Chance" all out on Potomac records.  As of December of 2019, Jeff signed a new record deal with RFL Records and in February of 2020 released their new single a remake of Foreigner's "Juke Box Hero" featuring Frank Hannon from Tesla on lead guitar.  They are currently writing and going to release a new single/video from their upcoming release that will be out in September of 2020 on RFL Records.

JCB is releasing a new single called "Fire" out March 26th and a brand new record called "Yesterday's Gone" out on RFL Records on April 23rd 2021.Stay tuned for more details at www.jeffcarlsonband.com or rflrecords.com.

@jeff-carlson-band Posted an update
one month ago

@jeff-carlson-band Posted an update
2 years ago

@jeff-carlson-band Posted an update
2 years ago