Retribution Alive started as a monthly Metal event at the Intrepid Fox in London run be Alan Hicks & Lindsay Griffin. The idea was to bring together a diverse range of metal bands on one bill, kind of like a mini festival. A great and original idea you literally don't know what you are going to get next.

After the Fox closed down they had to find other places to do it. Unfortunately the Fox never opened again so the idea was to just travel to different venues around London each month, another unique idea.

So let's dig into the recent event at the Unicorn. The Unicorn in Camden is one of the best if not the best pub/music venue in London. All the gigs no matter how big are free. You are pretty much guarantee a decent crown and the beer is a lot cheaper than most places. Sometimes the sound can be lacking but what do you want It's a pub.

So let's review the bands:


First up was Metalcore band from Romford Essex Cold In July. This 4 piece have that classic metalcore sound with barked out vocals and some clean singing but don't sound as formulaic as some bands in the genre. Plenty of great riffs and breakdowns. The guitarist and vocalist would often get off stage and mingle with the audience. The singer locked fucked after the gig which shows his passion and effort. Also these guys are young so hopefully a good future ahead of them.

Next up was Viking Metallers Call Of Fenrir (i told you it was diverse). Firstly they looked great done up in full Viking uniform equipped with Viking sails as well. This 5 piece of Vikings and one Shieldmaiden added a lot of fun to the night. The vocalist would go from a tenor style vocal to death growls and the music had that classic mid paced gallop style that Viking Metal is famous for. They also had one of the best crowd reaction of the night, epic stuff.

When I saw them step on stage a 5 Piece of dare I say it middle age men I wasn't expecting the insanity to come. This is a very original band which is hard to say now days. The songs would twist and turn from Metal to Punk and interspersed with these crazy unexpected blast beats, Very jazzy at times. The drummer is great and the guitarist is superb. They also had a sound effects guy but you couldn't really hear him maybe on record it makes more sense. Great band

Hampshire 6 piece Gothic Symphonic Metal band Season's End have professionalism and musicianship written all over them. Not sure what happened to them It's been more than 10 years since their last album but it hasn't affected their live show. Becki Clarks singing is superb and the vocal melodies between her and the guitarist and sometime's the bassist are lush. At times though I do wish they would stay on a heavy riff too many times it would fall away leaving me wanting more (maybe that's the idea). The biggest crowd pull of the night let's hope they can finally get an album out.

So to headliners Industrial Metal band Die Kur and we are talking more strangeness and originality. It felt more like a collective than a band as different people would get up on stage to do a spoken word part or play violin. Vocalist Ays also played keys, sound effects and even a theremin. Songs would start rather strangely often the music stopping and starting but when they needed to lay down some riffs that was not a problem. A really interesting and original band and a great way to end the night.

So to conclude I think this has been the best Retribution Alive I have been to for quality of bands and also for a good turn out. Look forward to the next one 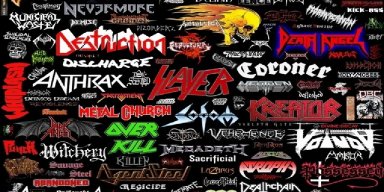