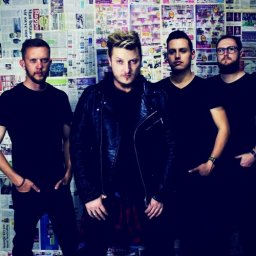 THE LOUDEST BAND IN SOUTH AFRICA!

The band’s influences have oozed 70's, 80’s and 90's Rock legends including; Led Zeppelin, AC/DC and Guns n Roses, all the way to new age and current artists such as Rival Sons, and Heaven's Basement as can be heard on their first self-titled EP album (Black Bone Nation), released on 17 March 2018 throughout all major digital outlets. The band focuses on bringing back that classic rock old school rock sound with a modern twist.

The band makes use of their own pyrotechnics and stage effects during their live performances, incorporating their raw rock energy with entertainment, making their mark at each show that they attend. This has seen them provide a live show unlike anything the local gig scene in South Africa has seen before.

Black Bone Nation has started working on their second studio album (To be released end of 2018), whilst touring the South African gig/club scene.

A shot of whiskey is all you need to join THE NATION!