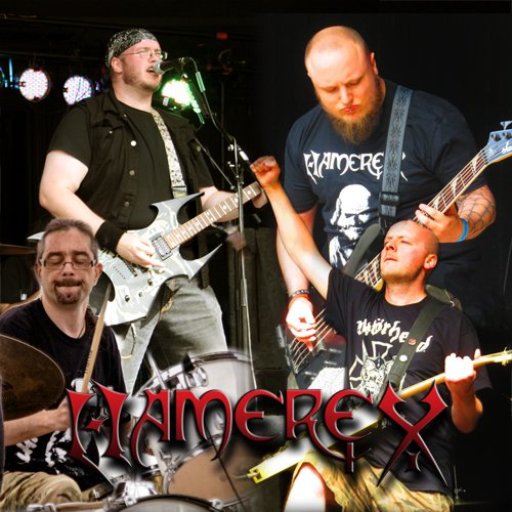 Hamerex are an energetic and entertaining live band with their influences coming through in both their music and live shows. Hamerex have supported such bands as PowerQuest, Conquest Of Steel and Funeral For A Friend as well as playing at Clarence Park Music Festival in July 2012 and Coalfields Festival in July 2014.

2012 saw Hamerex release their debut album on Casket Music which was highly praised by a number of reviewers with Rhys Stevenson of Global Metal Network saying “‘Rites Of Passage’ brings a whole new stance on the meaning of original and traditional, this is by far one of the most impressive rejuvenations of old style metal to be unleashed, a sheer class of absolute proportions.”

2013 saw the band open for Funeral For A Friend in April, which was then followed up with the release of the highly praised ‘IX’ album, which was considered a “work of art” and “masterpiece” by fans, with high praise also from reviewers. The band supported the album playing live regularly through late 2013 to early 2014, with the band celebrating their 10 year anniversary with a special gig, with a set list chosen by the fans, and also marked the departure of long time vocalist Chris Moules.

The latter part of 2014 saw the band start work on a new E.P. which would be fronted by Steve Blower. ‘The Last Ride’ was released in March 2015 and was once again highly praised by reviewers, with Steve’s vocals coming as quite a surprise to those that followed the band previously.

Shortly after the band had released ‘The Last Ride’, the band began writing and recording their follow up to ‘IX’, titled ‘Traitor’, which was released on 7th October 2016 to critical acclaim and high praise from fans. Just prior to the albums release, Darren Kelsall left the band, with Sharif Diz Dyson joining the band the following month.

In 2017, Hamerex hit the road, playing around the UK in support of the ‘Traitor’ album, with notable appearances in Hastings at Mearfest and returns to Clarence and Coalfields outdoor festivals. In between gigging, the band began writing and recording and announced The Abyss EP Trilogy which will be released throughout 2018.